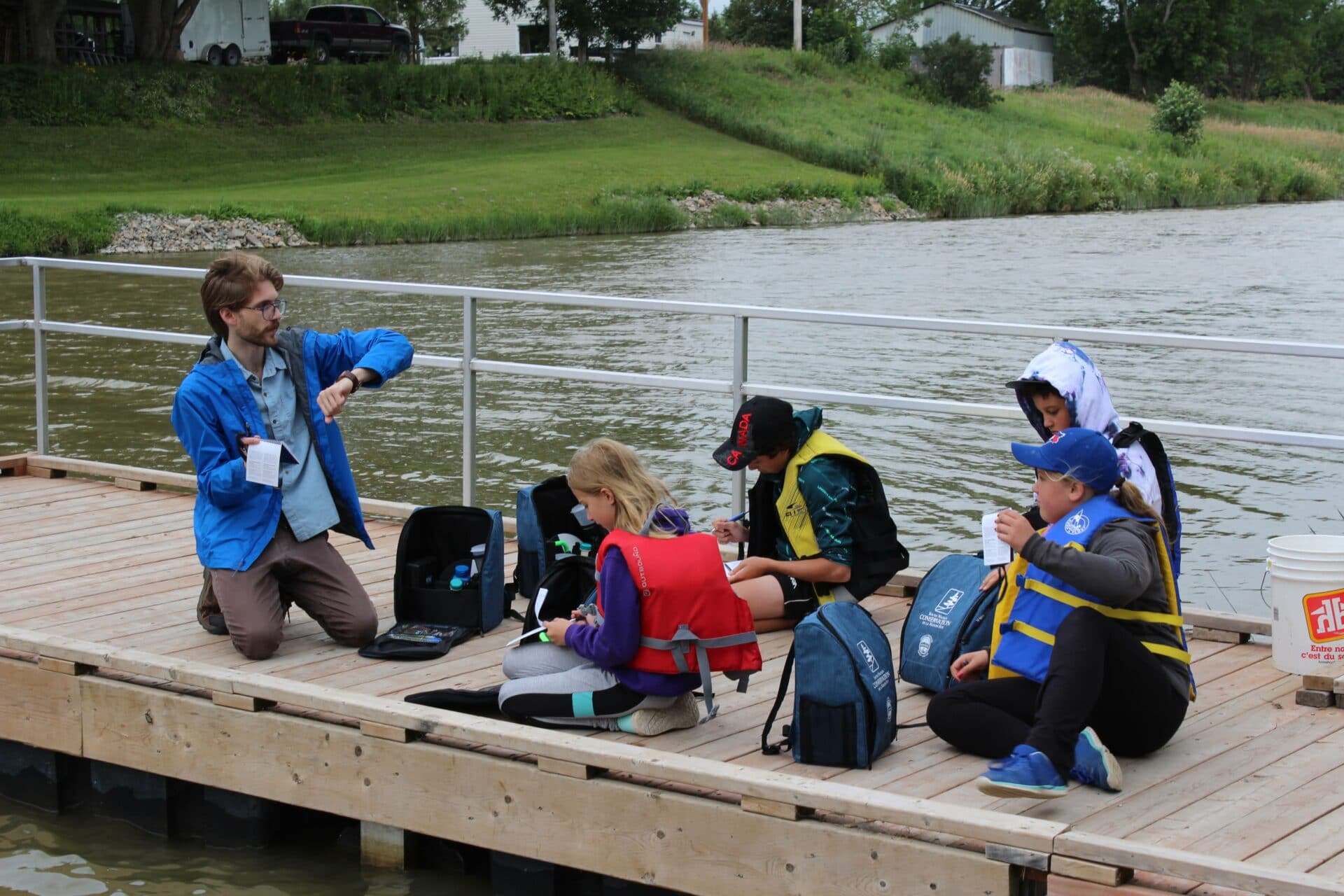 I want to acknowledge that our excursion on the South Nation River took place on unceded and unsurrendered territory belonging to the Algonquin, Mohawk and Haudenosaunee peoples. We thank them for the use of their land today, and every day.

After over a year of virtual events, I was thrilled to be a part of Water Ranger’s return to in-person excursions last Thursday. When we heard that the South Nation Conservation Authority was holding the return of their Fish Camp for 2021, we jumped at the invitation.

It was a cloudy, windy, and unseasonably chilly day, but the Fish Camp members were committed to being there, rain or shine. As I arrived, I was struck by the appearance of the river. In this area, it was flowing faster than I expected and was cloudy and brown. Members of South Nation Conservation explained to me that the cloudy, brown colour is due to the mixing of marine clays on the riverbed.

The event coincided perfectly with the launch of our new Freshwater Explorer Testkits, so I brought a few for the students to try out and for South Nation Conservation to use going forward. Fish Camp was an excellent opportunity (and my first!) to see the kits being used in person by the youth they were designed to serve.

Water Rangers and South Nation Conservation have maintained a longstanding relationship since 2018 when we officially launched our online store. That year, we were able to attend in-person events and supply them with grant-supported testkits. They even honoured us with the Friends of South Nation Award!

South Nation used our original batch of 2018 kits to educate youth through programs and camps. Fast forward to 2021 and we wanted to renew this relationship by sending them new kits. Last year, stock shortages hit us hard due to COVID-19, and in a pinch, South Nation supplied us with what we needed to keep going. If we had a “Friends of Water Rangers” award, we would have given it to them for this generous act. Maybe we’ll have to create one…

On the banks of the river, the eager youth split into three groups to adhere to COVID-19 protocol. I began setting up my station. Then, I asked each student about themselves, finding out where their interest in fishing came from. I quickly discovered that these youth had many things in common, including a love of fishing and natural waterways. As I broke down the different testing parameters, it was clear that many of the youth had lots of prior knowledge that we could build upon together. The kids knew all about the conditions in which freshwater fish thrived, and making the connection between water quality and fish health was natural for them!

We then made our way down to the dock together. We spoke a bit about what we could see and hear around us. Context is always important in water quality testing. The youth were keen on getting started right away, and required little instruction from me to get going. I allowed the youth to lead in the observation, having them tell me what their measurements were and what to write down. This helped to develop a sense of trust, where students felt heard, that their observations mattered. I was not there to tell them what to write, and they seemed to appreciate this.

After close to three hours of working with the youth, it was time to go. The weather had broken a bit, and the temperature was returning to seasonal norms. Luckily, we had no rain that day (not everyone had a coat!).

In the end, it was a great day!

All in all, it was a great day of testing, and we can’t wait to do more in person events with South Nation in the future. None of this would have been possible without the generous support of NSERC PromoScience, who is supporting our educational programs this year.

Browse our online store for more info on how you can get your own testkits! We used the new Freshwater Explorer kits for our excursion with South Nation.