We all have our reasons for wanting to test water quality and understand when water is healthy. For many people, understanding if the water is healthy enough to support some of their favourite fish is very important. In 2021, we decided to ask our community which freshwater fish they were most passionate about!

We listened, and we added a few of our favorites as well. Kat drew this amalgam of freshwater fish. How many do you recognize? You can find them in the compact kit box, and on our t-shirts.

1 – Rainbow Trout – Rainbow trout were first introduced into the Great Lakes in 1895, and into the other parts of Ontario between 1883 and 1904. Prior to this rainbows were only found on the West Coast and Rocky Mountains in Canada and the USA. There are actually three forms of rainbow trout; Rainbow, Steelhead and Kamloops. Each has different colourations, with Rainbows having bright intense markings, Steelhead are silvery with dark spots and Kamloops having more of a bright and silvery colouration.

2  – Minnow – Minnow is the common name for the largest family of fishes found in North America. Goldfish are even considered Minnows! They can live in a great variety of habitats including bogs, swamps, springs, rivers, ponds, and lakes. Due to their unique small size they provide an important link in their respective food chains.

3 – Yellow Perch –  Yellow perch are 10-30cm long, with an olive green back, 7 thick dark stripes and a silver belly. The intensity of color may vary with age and water clarity. They are easy to catch and a favorite of fishing families.  These fish are also a favorite snack of Cormorant birds.

4 – Long Nose Gar – A living remnant of the prehistoric era. It’s the most abundantly distributed out of the seven species of gars. They grow to about 5 to 6 feet in length and weigh up to 50 pounds. Gars use their swim bladder as a lung to breathe air in water with low dissolved oxygen levels.

5 – Bowfin – The Bowfin fish has lived alongside dinosaurs and is currently thriving in eastern North America’s backwaters. It has a mouth full of sharp teeth helping it prevent the overpopulation of forage fish. They are able to breathe both air and water, making low oxygen environments no match for this living fossil.

6 – Lake Sturgeon – The Lake Sturgeon is Canada’s largest freshwater fish. They can  weigh up to 180 kilograms and reach over two meters in length. It has an extended snout/nose with four whisker-like organs hanging near the mouth. Its body is covered with large bony plates, similar to plates of armor. It also has a skeleton made up of cartilage instead of bones.

7  – Channel Catfish – The largest of the Catfish in Canada, ranging from 30-60cm although they can get much larger. They’re the most fished catfish species, with around 8 million anglers targeting them per year. Channel catfish possess very keen senses of smell and taste, allowing them to find food in dark, stained, or muddy water with ease.

8 – Muskellunge – The allusive ‘Muskie’ can grow to 5 feet in length. The name muskellunge originated from the Ojibwe word maashkinoozhe, which means great fish, and maskinoše or mashkinonge, which means big pike. They are one of the most sought-after freshwater game fish in North America.

Support Water Rangers by getting your own shirt! 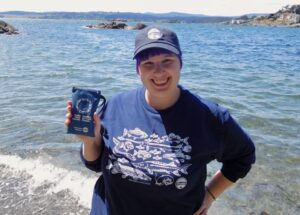 All proceeds help support us in our mission to provide accessible water monitoring for all!

END_OF_DOCUMENT_TOKEN_TO_BE_REPLACED

9 – American eel – The American Eel is a fascinating migratory fish with a very complex life cycle. Like salmon, it lives both in freshwater and saltwater. But its life-cycle is exactly the reverse of salmon’s: it’s born in saltwater and migrates to freshwater to grow and mature before returning to saltwater to spawn and die. This eel can live as long as 50 years! It is considered an indicator species, meaning the health of its populations is a good indicator of the health of an ecosystem or habitat.

10 – Bluegills – Bluegills are part of the freshwater Sunfish family. Depending on the region, bluegills can also be referred to as bream, brim or copper nose. One of the most interesting traits of the bluegill is how bold they can be. Many bluegills have no fear of the angler trying to catch them. In some places bluegills even show an affinity for being stroked by anglers.

11 – Smallmouth Bass – The Smallmouth Bass is also a member of the freshwater sunfish family. They are a top predator that eat a wide range of prey, including insects, crayfishes, fishes, tadpoles, frogs and plant material. They can be invasive when introduced to new lakes and rivers. In Canada they are native to the St. Lawrence River – Great Lakes systems, and can be found as north as Hudson Bay.